Introduction
The HOS are also utilized to assist students in developing traits such as respect, honesty, and compassion, which promote ethical behavior.  When students exhibits unethical behavioral the HOS are tools that allow them to reflect on the roots of their behavior and develop ways to act more ethically in the future.  Students also reflect on their HOS regarding ethical behavior during CREW, student-led conferences, and Passages presentations. Ethical behavior is demonstrated through our discipline data, use of restorative practices, and students' interaction and cooperation with others. 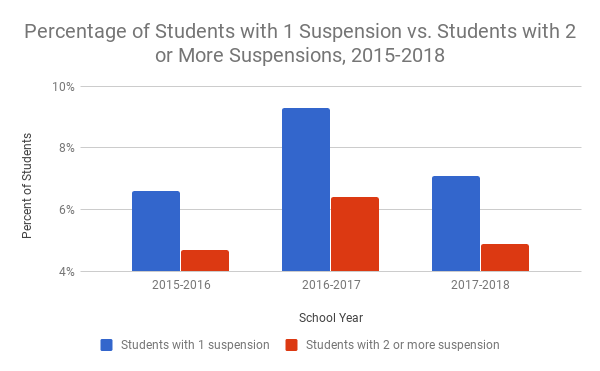 Benchmark Highlight
One of our benchmark goals for 2017-2018 was to realize a decrease in the number of students receiving suspensions.  This was achieved for 2017-2018.  Our dedication to teaching HOS traits (Tenacity, Collaboration, Communication, Leadership, Integrity) will continue to focus student behavior toward being ethical members of our school community. As students grow in their habits of scholarship, our goal is that the suspension rates will continue to decrease.

Another piece of evidence compares percentage of non-white students receiving one or more in-school suspension (ISS) at MGM and other middle schools in our school district. 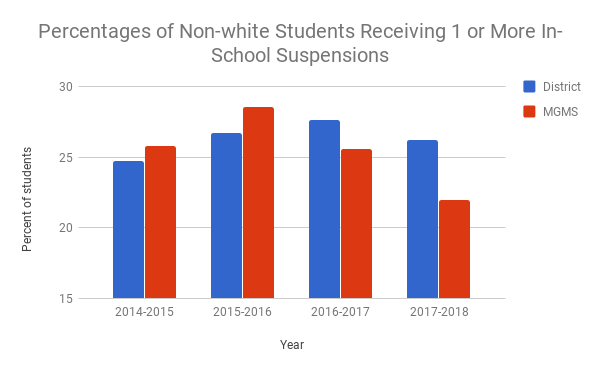 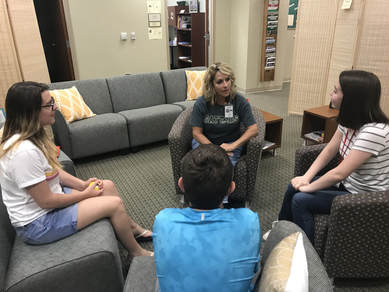 The Student Story: Restorative Practices
​
Research has indicated that, nationally, minority students tend to receive a  disproportionate number of suspensions as compared to their white peers. Additionally, students of color tend to be referred to administration for more subjective offenses (Skiba, 2000).  One means of combating these institutionalized biases is by implementing alternative means of discipline, such as restorative practices. As a school, we recognized the research and began learning about and implementing restorative practices to combat these inequities.
For example, at MGM we have begun to implement restorative practices, which involved facilitated conversations between students and teachers, as well as affinity groups, to support specific populations of students.
Research on restorative practices has suggested that it can help improve students’ empathy (Costello, Wachtel, & Wachtel, 2009; Smith, Fisher, & Frey, 2015), which can lead to more ethical behavior.  Additionally, the use of restorative practices can used as a preventative and/or alternative to relying on exclusionary consequences.

Limited implementation of restorative practices began at MGM in 2016-17 when one administrator and four counselors participated in training on restorative practices.  As a result of that training they began implementing some restorative conferences that school year. In 2017-2018 counselors and administrators expanded the use of restorative conferences with students, teachers, and sometimes parents.  During these conferences participants are asked questions including, “What happened and what were you thinking at the time?” “Who was affected by these actions, and how were they affected?” and “What do you need to do to make this right?”  These questions help students build empathy by considering how their actions affected others. These questions also help students understand what others were thinking, thereby better understanding others’ point of view. Finally, participants work together to decide how to make a situation right.
Growth in HOS by GPS participants was evidenced in survey results illustrated in the graph on the left (Graph 2.5).  Participants completed a pre- and post-survey which included the following question: “Agree or Disagree - I am a tenacious leader who communicates and collaborates with integrity.”  Through the GPS structure, our girls of color have grown in their self-efficacy regarding the Habits of Scholarship. Future surveys will ask questions to further delineate students’ self-assessment of individual HOS.
Evidence Block Two: Growing Into Ethical People
​
The Data Story: HOS Points
A final data set that corroborates the previous suspension data is the HOS data regarding indicators that specifically illustrate ethical behavior: 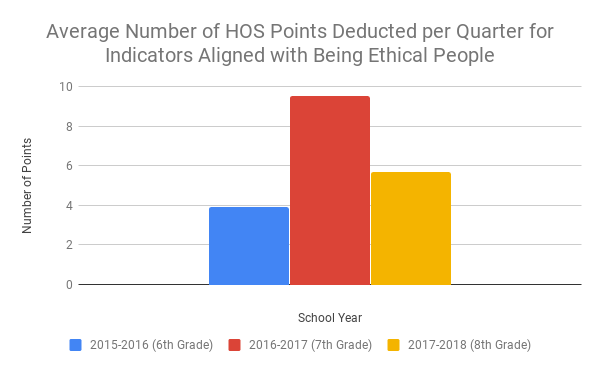 Graph 2.6 - Average Number of HOS Points Deducted/Quarter for Indicators Aligned with Ethical Behavior. *Note: 2015-2016 was implementation year, during which HOS reporting began third quarter.
The graph above (Graph 2.6) illustrates the average number of HOS points that were deducted each quarter for a cohort of students as they matriculate from sixth to eighth grades [reminder - a decrease in HOS point deductions means that students are more consistently exemplifying the HOS and therefore having fewer points deducted from their HOS score].  There was an increase in points deducted for these indicators related to ethical behavior from this cohort’s sixth to seventh grade years. This is likely due, in part, to the fact that the HOS point system was implemented at the beginning of the third quarter in 2015-2016, their sixth grade year.  Additionally, in 2016-2017 the first 10 minutes of weekly professional learning time was devoted to having teachers enter HOS points. As teachers became more comfortable with this system, it is not surprising that more points were deducted in 2016-2017. The average number of points deducted for ethical habits declined for this cohort’s eighth grade year.  This suggests that students internalized these specific HOS and thereby demonstrated more ethical behavior, such as honesty, respect, and kindness.
The Student Story: Unified Physical Education and Dance
​
Sixth and eighth grade students collaborate with the Cross Category special education students to form the Unified physical education and Unified dance classes at MGM. The students in these courses work to support one another in differentiated tasks so that all can participate, celebrate one another's successes, and build empathy toward fellow human beings.  When we started in 2012 there were no such opportunities for our students.  Since then over 200 students per year are participating in a Unified class with our special needs students.
​During these Unified classes students reflect on their experiences and how they have used the HOS in this class.  Below are three artifacts.  The first is the teacher's guidelines for a Unified PE journal entry.  The second and third are sixth grade students' journal entries regarding their use of HOS in Unified PE.
Journal Description                                                         Journal Entry                                                      Journal Entry​
Evidence Block Three: In-School Suspension Reflections
At MGM we view in-school suspension (ISS) as an opportunity for students to refocus and reflect on their behavior.  To assist students in the reflection process we provide students a note catcher that they complete while they are in ISS.  Embedded in this reflection is a question regarding which HOS the student could use to improve their behavior. Our goal is that this experience turns a behavioral concern into a learning experience for students. Including HOS in this experience helps students focus on specific skills that can improve their behavior in the future.   In addition to reflecting on HOS in ISS, students conclude by answering the question, "How could you handle a similar situation differently in the future?"  This causes students to consider changes in their behavior that would be more ethical.  Examples of student ISS reflections can be seen below. ​