​Mastery of Knowledge and Skills CLAIM ONE
Our students demonstrate achievement in LITEracy and NUMeracy that exceed state and district performances.

School Report Cards
Note: The state assessment changed multiple times as indicated on the report cards.
​2014
2015
2016
​2017
History of Standardized Tests and Progress Monitoring Measures
When reviewing student achievement through the lens of standardized test performance, it is critical to note the history of the tests administered in South Carolina and how this history is a factor to be considered when reviewing overall student performance. Three different tests have been used to measure student mastery of performance standards since Meadow Glen opened in 2012. Details of those tests are outlined below:

Test #1: Palmetto Assessment of State Standards (PASS - 2013 and 2014) - This statewide assessment included two days of testing in the area of Writing (complete with an extended-response prompt), followed by English Language Arts (addressing reading and research standards), Math, Science, and Social Studies being tested for one day per content area. The test was offered via paper/pencil only and was untimed.

How do the subsequent tests differ from PASS?

Test #2: ACT Aspire (2015) - Initially, Smarter Balanced Assessments were going to be the measure of student mastery of performance standards for students in South Carolina. These assessments were aligned with Common Core standards and were determined to be the best measure to determine student success. The state legislature approved the South Carolina College and Career-Ready standards for ELA and Math, and ACT Aspire was selected as the state assessment. Unlike PASS, ACT Aspire was nationally-normed, utilized in multiple states, timed, and aligned with the ACT College and Career-Readiness Standards. The expectation was that ACT Aspire tests in the elementary and middle grades would be a performance indicator for ACT at the high school level. Students had to make the adjustment from an untimed test to a timed test, as well as a change in rigor and expectations for student performance. The test was administered through paper/pencil.

Test #3: SC READY and SCPASS (2016 and 2017) - South Carolina legislature approved the implementation of SC READY (for ELA and Math) and SCPASS (for Science and Social Studies). With the implementation of SC READY as an untimed, paper/pencil test in 2016, the expectation was that there would be a vertical scale with which to compare student performance over time and across years. However, during the first year of administration (2016), the vertical scale was not used for reference. The test was realigned for the second year (2017) to include a vertical scale with which to track students over time and across years. Another key difference between SC READY and PASS includes the implementation of text-dependent analysis being used as the writing prompt instead of an extended-response to a standard prompt. In 2017, the SC READY test was administered as an online test that students completed on their iPads.

ELA and Math Progress Monitoring: NWEA MAP to STAR 360 - Prior to 2017, NWEA MAP was used as a nationally-normed progress monitoring tool. The RIT scale was used to provide a measure of students’ performance levels and compare those levels against similar students nationwide. It was also used to measure student growth. STAR 360 is now used as a performance-measuring tool that is aligned to SC state standards. This assessment, offered throughout the school year in core content ELA and Math classes as well as Special Education classes as a progress monitoring tool, provides instructors with an indicator of student mastery of standards. The assessment also serves as a predictor of student performance on the end-of-year SC READY assessment.

Evidence Block One: State Assessment Results (ELA/Math)
The graphs below detail three years of standardized assessment data that show Meadow Glen Middle School’s consistent performance in numeracy and literacy. While the actual test has been different each year, MGM students continue to meet or exceed standards at a higher rate when compared to district and state performance. ​
​Evidence Block Two: STAR 360 ELL Growth (ELA/MATH)
During the 2017 school year, MGM began using the STAR 360 test as a district benchmark to measure student mastery as it relates to academic standards. Unlike NWEA MAP (which was previously used as a progress monitoring tool), STAR 360 serves as a predictor of student achievement on ELA and math state standards because it is aligned to the state assessment. Through the implementation of this tool, teachers are able to set learning goals for students, determine the effectiveness of instruction, and identify student learning needs. Our ESOL teacher collaborates with core content ELA teachers to increase student competencies in reading and math. One of the biggest shifts is that students are accessing texts on their reading levels in addition to working with the anchor texts for expeditions and other texts in their core classes.

The graphs below detail the overall growth of our ELL population in comparison to the overall growth of non-ELL students in all grade levels from the Fall to Winter administrations of STAR 360. ​These growth measures highlight the gains that our English Language Learners are making in the areas of ELA and Math. Our ELL population grew at a higher rate than our non-ELL population as evidenced by their performance on Fall 2017 and Winter 2018 administrations of STAR 360.

Additional graphs show that our ELL population has also grown at a higher rate than other ELL populations across the school district on STAR 360, which serves as a strong predictor of our students’ performance on the Spring administration of SCREADY. 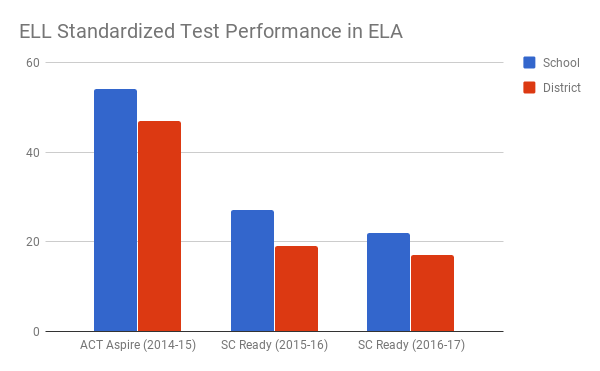 MGM English Language Learners have also consistently outperformed their district cohorts on standardized tests in ELA, including ACT Aspire and SCREADY. The graph above highlights our students' performance.
​Evidence Block Three: Literacy
For the past two years, literacy has been an intentional focus in our professional learning. As a result of our focus on literacy, we have seen our African-American students perform above state and district averages in English Language Arts by at least 5% (which meets a performance benchmark as outlined in our school's work plan). 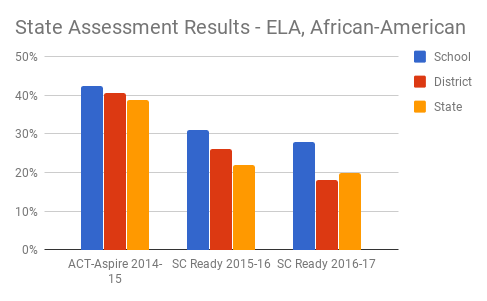